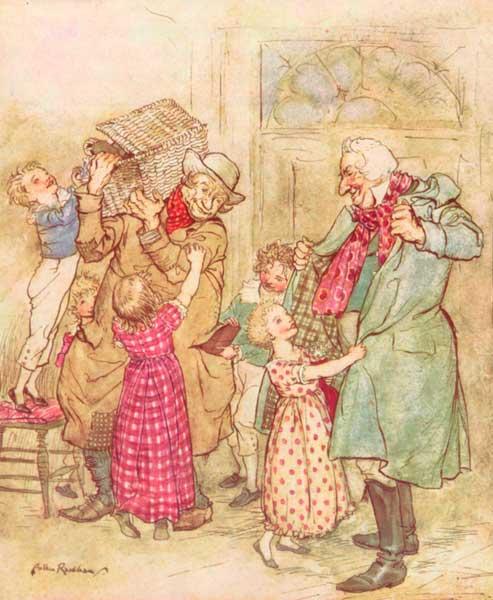 What makes a good Christmas or birthday present? Mrs. Francis Steinthall offers some guiding principles on the kind of toys and gifts which will cultivate a healthy imagination and entertain for years. This article was first published in the Parents' Review, the journal of which Charlotte Mason was editor, and while the specific examples Mrs. Steinthall uses are less familiar to educators today, the general ideas are still fresh and relevant.

“Christmas presents are not always a source of unalloyed bliss to the giver, and occasionally, when the donor has chosen a gift because he would have liked it, not to the recipient…I write on behalf of the children whose shelves and cupboards groan under the weight (if they are careful children) of their many toys. In many cases familiarity has bred contempt, and the cart and horse of last Christmas is ruthlessly destroyed to provide firewood for Guy Fawkes or the doll and clown beheaded because Lady Jane Grey and Charles I. were, and the drum is broken on a younger brother’s head, and for these children with their misplaced energy I also write. They are as blasé in their world as the oldest man about town is in his.

An intelligent mother of our acquaintance always considers first whether any toy under consideration is suggestive or not. A dredger which was largely sold last Christmas, which the child can only turn and turn, and watch innumerable buckets re-fill themselves with sand and patiently pour it out again, belongs to the non-suggestive class…The child is amused at first…but only one part of his brain is attracted, and that soon becomes weary of the repetition because there is nothing for the child to do himself, no skill to try for. He is looking at something he has no personal interest in, and very soon the toy is broken or put up on the shelf, and the parent is surprised and disappointed because the child has ceased to care for it.

These toys resemble a finite verb, viz., a verb limited to some particular subject…Last Christmas a child of five, who had received seven or eight beautiful toys from the Christmas tree, was discovered playing with a cushion wrapped in a shawl as a doll half and hour later, the presents, which included a very fashionable wax doll, lying on the floor untouched. Set in practice temperance even in the giving of toys, and give suggestive not finite toys…I will append a list of a few toys which belong to the two classes, so that parents may clearly comprehend what is meant by the terms:—

"Set in practice temperance even in the giving of toys, and give suggestive not finite toys."

—These are but a few examples out of many."

Needing some ideas for these types of presents available today? Here is a list compiled by Alveary members of good toys for children today.

The rich text element allows you to create and format headings, paragraphs, blockquotes, images, and video all in one place instead of having to add and format them individually. Just double-click and easily create content.

How to customize formatting for each rich text

Headings, paragraphs, blockquotes, figures, images, and figure captions can all be styled after a class is added to the rich text element using the "When inside of" nested selector system.

Stay up to date

Advent for All: Hope in Beginnings

Week 1 of the CMI Advent and Christmas series of resources for families, classes, neighborhood, etc. Read or download.